If you’re a fellow Canadian blogger and thinking of attending BlogPodium next year then this BlogPodium 2016 recap post is for you! I had been looking forward to BlogPodium ever since I bought my ticket months ago.  I had such a good time at Haven last year, and I really wanted to attend a Canadian blogging conference.  If you’re a fellow blogger and thinking of attending next year (or even just want to hear about my weekend trip to Toronto) – then this BlogPodium 2016 recap post is for you!

After baby’s first big road trip to visit my family for the Labour Day weekend, I was more confident that I could take him with me to Toronto (which is about half the drive).  I painted a second coat of paint on my DIY board and batten hallway and then left Friday before noon (I try and paint when baby will be out of the house for a few days so the fumes settle).  I HAD to make a stop in at Ikea in Vaughan; returned a few items, and got a bunch more!  Also, I found out afterwards that they have the cutest baby/family washroom there, complete with some chairs and pillows for comfy feeding, a change station… and a mini toilet for toddlers!  (It was super cute).

We then made our way into downtown Toronto to meet up with my Mom (she would be taking care of baby while I was busy at the conference).  We ended up staying at an AirBnB (my first time!) and it was super convenient.  With a baby, it’s difficult to find hotels that have fridges in the rooms – and that were close enough to the event.  The apartment was just over a 5 minute walk away, and my Mom was able to quickly walk over to collect my milk deliveries (I was pumping throughout the day). BlogPodium was held at the St. James Cathedral Centre, which was a church connected to a conference space (super cool juxtaposition of the “old” brick church and the modern glass space).  The little man was just on the tail-end of his 3-month growth spurt, so he had Momma (that’s me) up every 2 hours in the night… then I had to get up and look presentable for the event.  Thank goodness we were so close – I would definitely AirBnB again! I must have gotten in at a good time, because there was no line and check-in was super quick.  I met a few other bloggers while waiting for the first presentation to begin.  (It was about business taxes and I really liked it – but unfortunately had to leave early to attend some speed-networking appointments with sponsors). The table centerpieces were metallic spray painted office supplies (courtesy of the sponsor Krylon).  We could grab what we wanted, so I snagged a pen and a pencil.

I think this was the first year that BlogPodium had a sponsor speed-networking event.  Basically, the different bloggers could schedule meetings ahead of time with brands that they wanted to partner/work with in the future.  I mistakenly thought that there would be sponsor booths setup as well, and I didn’t know that the speed-networking meetings would be the only chance to connect with the brands!  Thankfully they had some open slots left, so I tried to get in to those with the brands I missed throughout the rest of the day (the coordinator of that room probably remembers me as the “crazy one” who kept coming back whenever I had some free time). The keynote presentation was just during/after lunch and was a great “motivational” type speech by Tiffany Pratt.  I have to be honest, I wasn’t that “in-the-know” of everything about Tiffany Pratt, but she seems to be all about the colour and glitter – so definitely my type of lady!  She did mention she has more of a “more is more” maximalist approach, and I tend to tip towards to minimalist side instead.  I will definitely be reading/following up about her though :) There were a lot of sponsors, and we received some awesome swag bags too.  Oh, and I even got some great products just for meeting with the different brands for speed-networking, so I’m looking forward to testing out a bunch of stuff soon!

Random story, I was pumping milk throughout the day for the baby, (yes – that was me!) and at first I was in the main level bathroom.  I felt like I was kind of in the way, so I switched it up and went upstairs where it was much quieter.  As I was cleaning up during my last pumping session – a male janitor just walks right in and starts cleaning!  Like didn’t knock on the door, didn’t say “oops sorry let me come in later”, just went right about his business like I wasn’t even there.  If he would have showed up not even 2 minutes before I would have been mid-pumping and would have freaked!  I fully support breastfeeding in public, but I am way too “shy” and prefer a little privacy.

(Oh and second random story: every time I go to write “pumping” I keep misspelling it as “pumpkin” – so clearly I am excited for Fall and Halloween!). And since we’re being real honest around here – the dessert spread was a little bit too delicious!  I had like three plates, and I could barely eat supper I was SO full from all the desserts.  So, if you take away anything from this BlogPodium 2016 recap post, remember that the desserts were bountiful and you should definitely attend next year :) Okay, but seriously… I loved all the great bloggers I met at Haven in 2015, however I was really looking forward to talking to some great Canadian brands this time (which was the one downfall of Haven – “Oh you’re from Canada, sorry we’re only US based).  I am a little sad that I didn’t talk to as many fellow bloggers as I would have liked, but at least the program has “yearbook-style” photos of everyone with contact info, so I can always stalk them online hahahahah!  Speaking of which, it would have been neat to go around and get everyone to sign the program (just like a yearbook) – but I only thought of that when I got back home. There were also a few fun follow-up challenges in the swag bag (including the challenge to repurpose the bag itself) so you may see a few more BlogPodium tidbits from me still.  This is what my bag looks like now (I had photos of the original bags a bit higher in the post if you want the true “before”).

I mentioned quickly on Instagram that I was working on a photo ledge, and I just knew that I wanted to include the main messaging of the bag in some way (I dyed it pink and attached it to a canvas).  One of the reasons I stopped at Ikea was so that I could pick up a few frames for some prints I had, and I’m sure I will share the whole project (and more photos) eventually! 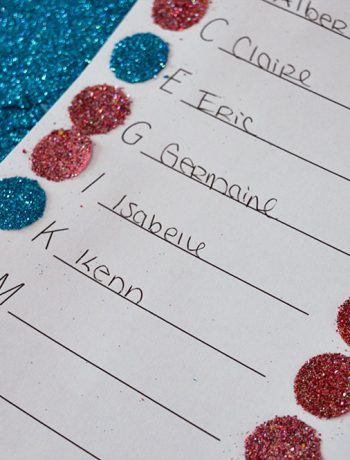 MUST do Christmas Activities