I’m sharing the basement apartment layout plans that we’ve come up with; so check it out if you’re planning a two bedroom apartment in a limited space! Last week I went over some of the demolition woes in regards to our rental renovation, and this week I’m sharing the basement apartment layout plans that we’ve settled on.  And by settled on, I mean all the framing is up and we’re starting the rebuilding process, so it’s pretty set!  Check out some photos of the progress and let me know your thoughts :)

Just a reminder, after we opened up all the walls and discovered pretty substantial cracks; we had to get them fixed up and that derailed our timeline a bit. Once the new concrete along the edges was set, our contractors came back in and started laying the subfloor pieces.  Demolition uncovered a support post, but I pretty much had that area dividing the bedrooms anyway.

Actually, we also uncovered a missing post in the living room, so it will have to be added again!  Unfortunately, it kind of takes away from the completely open living space, but it ended up being out of the way from where I was envisioning furniture and stuff.

Before demolition began, I had gone in and measured everything as best as I could and came up with this layout: 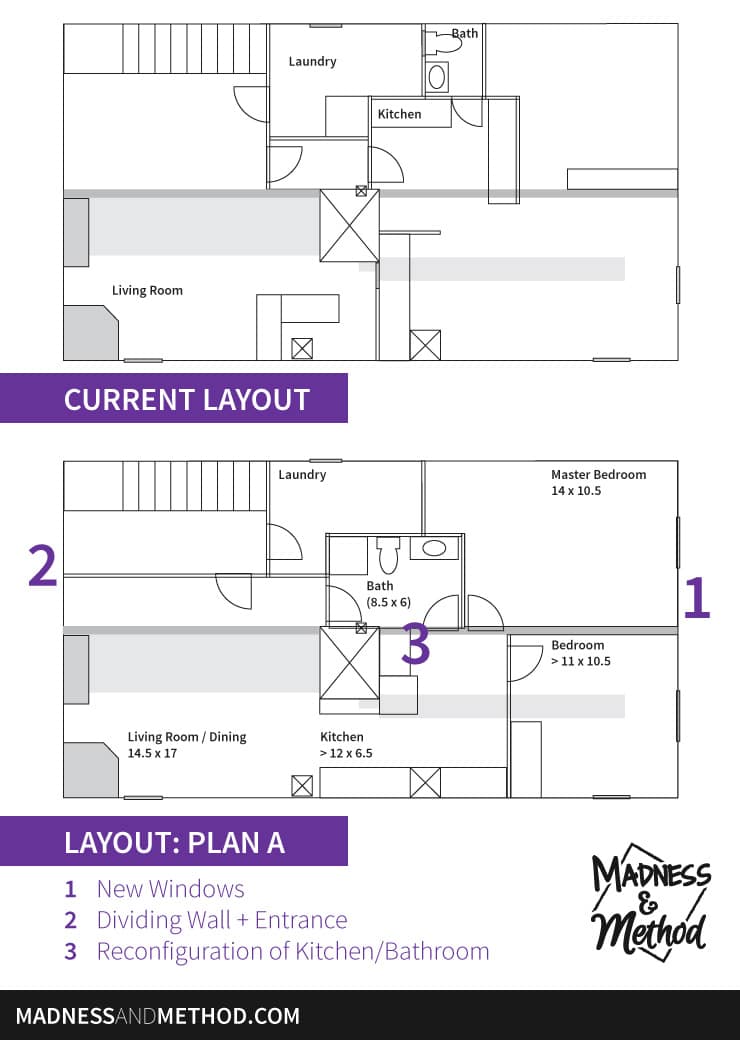 The main thing to know is that the basement dimensions are approximately 23 x 43 feet, the furnace is located right in the middle of everything and we weren’t moving the laundry room either.  I’ll share some photos of the framing that we have up now, and if you scroll past those I’ll share the updated 2 bedroom basement apartment plan (just a bit different than this one).

So basically, you walk down into a shared hallway with the door to the apartment at the end on the right. We’re going to be keeping as much storage under the staircase as possible, and the door at the end of the hallway leads into the laundry room still (similar to the original basement layout). We pushed as much into the laundry room as we could, but unfortunately, the final bathroom size had to get squished down a bit.  This will be a shared laundry space, so I don’t anticipate people will need the floor space to hang laundry on a rack (they’ll probably do it in there own apartments, right?).  The plan is to keep this room pretty much as-is (aka no drywall being added or fancy finishes). Anyways, once you enter the apartment, they’ll be an entryway/storage area to the left of the door – and you’ll be in the open living and dining room. My first thought was to have a kitchen with an eat-in style dining room (with a built-in bench covering up the water main) but demolition uncovered a huge wingwall (that concrete structure in the photo above!) and we can’t take it out. Which means that the dining room had to get moved a bit more into the living room space, but I was able to squeeze in 3′ more of cabinet and countertop space.  I’ll be talking about the kitchen layout and design plans in more details in a couple of weeks, so make sure to stop back in then! Oh, you notice that big hole of dirt on the ground do you?  Well, the original plumber we had cancelled, so we’re waiting for someone else and we kind of have to work around that…

When we were first planning these renovations, I was thinking of using an above-floor plumbing system from Saniflo for the kitchen because it is more DIY-friendly (plus quick to install and more cost-effective alternative compared to regular plumbing!).  However, we found out that our plumbing stack is one of the old cast ones and needed to be replaced, including running all new lines, which is obviously going to cost us a lot more :( Anyways, at the end of the kitchen is a small hallway that connects to the bedroom and bathrooms.  Unfortunately we have one duct that comes extra low in this area, so hopefully people don’t hit their heads on it!  (Anyone have any suggestions on making it stand out in a nice looking way?). My original bathroom estimated size was at least 8 x 6 feet, but it’s been squished down to just over 5 feet (and I can’t remember the width right now).  I was first thinking that it would be convenient to just do a shower and have two doors into this room (one from the entry); but decided to do a bathtub since we might be spending more time at this house than originally anticipated…

Right next to the bathroom is the master bedroom, and if you remember from the original walk-through, this was a super dark room with panelled walls and no windows.

The second bedroom got an upgraded window too, but it’s pretty much the same size as it was before.  However, I decided to push out the closet into the master bedroom (rather than have it come into this room or go into the kitchen) so that we would get as much space as possible in here. So basically, the living room is sort of the same (but with an added post), but now the dining room encroaches on the space in the bottom right (where I have the dotted line).  The kitchen has a similar depth, but is a bit longer; the bathroom is smaller, and the bedrooms were sort of shifted a bit to accommodate the support beam.

Unfortunately, I figured most of my dimensions thinking about building walls under the support beam – but didn’t account for the fact that it’s dropped a lot from the ceiling (and we only have 7′ ceilings to begin with!).  So we couldn’t actually open any doors if we had put the walls there (or the doors would have been only 6′ high).  As it is now, the beam will kind of be in the way of some of the doors (not the swing, but it will be in your face a bit at the entries).  But like I said, the ducts come down pretty low in a few spots too, so… So where are we now?  Pretty much what you see in the pictures!

Actually, the electrical was run this weekend (and my photos are from the day before), but we’re still waiting on that inspection before we can do the drywall.  We’re also in limbo right now with the plumbing, so can’t finish the floors until that’s installed and inspected as well.  I think it’s going to be a mad dash once everything passes and we can move quickly with the finishings…

So ya, while I want to start the kitchen the first week of October, I might be forced to wait a bit until we actually have a proper room (you know, one not made of dirt floors!).

OH and we may be upgrading the furnace too now that everything is open… so definitely a project that has snowballed beyond our original scope :(