The before, during, design and reveal of my brother’s white and black primary bath. Making an awkward, outdated space bright and new! I have something a bit different to share today – a whole before and after reveal!  Now, it’s not something that we did at our house, but it’s a project that I helped design.  Let me introduce you to my brother’s newly finished white and black primary bathroom!  (Plus the before photos and design plans of course).

A bit of history: my brother bought his townhouse in 2015; a 3 bedroom, 2.5 bath. It was clean, but not necessarily updated – especially the kitchen/baths. I helped him renovate his kitchen and did a super fun makeover to his half-bath on the main floor.  The plan was to slowly work on the different spaces as time/money allowed.  The problem is that my brother lives 5+ hours away (and I kept having kids, ha) – so coordinating our schedules didn’t always work out.

But he needed/wanted his primary bathroom redone.  You guys – there was carpet… even up the tub! The photos above are from the listing.  Don’t get me wrong, I LOVE carpet, especially a soft and squishy carpet.  But carpet in the bathroom… no way!

His primary bathroom is located above the single-car garage and takes up almost the whole size.  However, at the end, there is a narrow/awkward hallway because of a window dormer/roof shape. This was a huge room – but the layout was weird.  There was a huge corner tub (that my brother never used), a small, outdated vanity, and the darkest, dingiest shower in the other corner. I also didn’t like that it opened up onto the toilet – but considering he was the only person that used this bathroom, that didn’t bother him much.

The whole thing was beige – and although it matched the rest of his house, my brother is more into the cooler grays.

We realized pretty early on that this would be a large undertaking.  I was getting busier with the kids, and my brother lived with roommates so didn’t necessarily want to share his bathroom space during the reno.  He slowly saved up his money to hire contractors to redo the space for him – but needed me to come up with the plans!

HIRE Me for your renovation design plans!

The first thing we tackled was reworking the layout.  We wanted to maximize the whole space, including the narrow hallway.

Our other priorities included a much larger shower, smaller bathtub, opening up the whole room (no closed-off shower), and adding a double vanity.  Even though my brother lived a single life, a double vanity could be good for him in the future and would be way better for resale.

Again, this bathroom is HUGE – it just wasn’t planned as well as it could have been.  The floorplans below show all the options we considered, with the top one being the original layout: Option A saw the toilet moved away from the door, the shower and tub combined, and the vanity in the hallway.

Option B also had the toilet moved, the vanity stayed in the same location, the shower was expanded, and the tub was in the hallway.

Option C has the tub in the hallway, vanity where the shower used to be, and shower where the vanity was.  We could have also made the shower here the full length of the back wall.

Option D has the tub in the hallway, vanity in the same location, just larger (with a tall pantry cabinet) and the shower in the original location, but larger.

Option E keeps the toilet in the same location, moves the vanity to the shower’s original spot, and has a shower/tub wall along the back – leaving the hallway open.

Option F has the vanity in the hallway, shower in the original location, but bigger, and a regular size tub in the same location.

If you look at the original layout, you’ll see that the main bathroom section is about 8×10.  The narrow hallway presented extra space, and we had a lot of different ways that we could have filled it (or not).

Of course, there are WAY more floorplan options that we could have gone with.  Some were more expensive than others (ie: how much plumbing you’re going to move) – especially larger pipes like the toilet.

We determined that Option F would make the most sense.  The toilet, shower and tub plumbing would remain relatively unchanged, and we’d take advantage of the hallway by putting the vanity there. While we were working on the layout, I also had my brother look at different bathroom designs to determine what he liked.  I made a few different boards/groups on Pinterest that you can see here.  There were three different themes: One Bold Element, Light & Bright, and Masculine & Moody.

I was hoping for the last one, but he chose One Bold Element, and wanted to emphasize a white and black theme.  (Which shouldn’t come as a surprise since that’s exactly what he chose for his kitchen).

All the material selections, prices, quantities and plan details were given to him.  For the vanity, we were going to do narrow Ikea kitchen cabinets with black doors.  It would span the whole length of the hallway, and there was also an open wood section in the middle.

Unfortunately, with the Ikea cabinet delays, he couldn’t get all of the pieces and his contractor ended up finding an in-stock option.

OH – and they did change the layout a bit too.  Ready to see the transformation?

As a reminder, this is where we started: And here’s where we ended up (same angle): The location of the tub and shower were swapped – which is totally okay.  Apparently, my plan had way too much custom glass (ie: expensive) and this was more cost-effective. I also called out for full subway tile on that back wall.  Only doing the little section above the tub saved my brother 5000$ in labour and material (according to him, ha).

Either way, there’s a perfect space for some statement art above the tub now – so that’s fun! The original design had two shower niches the same size as the 12×24 floor tile. There was also a rock tile shower floor, but it may have been out-of-stock or discontinued.  They went with a smaller black square and a double-shelf niche instead. Our concern with having the vanity in the hallway was that you wouldn’t have as much back-up/butt space.  It’s totally fine in real life though.  (My brother did test it out for a while with tables/boxes in place to make sure he liked it before committing to this layout). Not sure if you can tell, but he doesn’t have any towel bars/hooks installed yet.  He also wants to add a shelf/cabinet near the shower.  But I picture a nice plant there too :)

(It is a good size for a full-length mirror, however, it faces the toilet so not sure that’s a good view when you’re peeing ha). Personally, I find the vanity section colours a little off.  The lightbulbs are cool compared to the ceiling lights – so it’s a bit jarring.  I’d also like to see the vanity painted a fun colour.  But maybe that’s just me? The walls are painted a super light gray, and it fits with his other refreshed rooms. But yes – definitely a major improvement! Especially considering how tiny his shower was – he loves this big one so much better!

Here’s a reminder of the before: I hope you enjoyed this white & black bathroom before/design/reveal post!  Remember, you can always reach out if you would like design help as well.  Coming up with different floorplans and going over finishing details is the best :)

Oh, and you better believe he said “okay, I’m ready for you to do the other bathroom now” – ha! 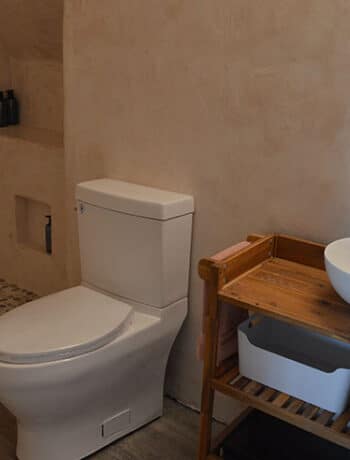